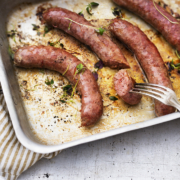 Stefan Wettainen is one of Sweden’s most influential food photographers. He captures food and beverage culture all over the world, and is equally at home working in the photo studio, at the restaurant, in a fishing boat, on the farmer’s field or in the woods. Stefan’s trade mark is his unaffected and down-to earth imagery, and his photos regularly feature in several Swedish newspapers and periodicals, among others the prominent food magazine Gourmet.

Stefan has contributed to over thirty cookbooks, both in Sweden and internationally, and has earned multiple awards, among others the Gourmand World Cookbook Award. He has been twice awarded with the prestigious Svensk Bokkonst Design award and was nominated for the James Beard Foundation Award for his photos in Fire and Ice: Classic Nordic Cooking.

His latest publications include Bastu – a book on the cultural history of sauna around the world, the cookbook Vego i världsklass and Beyond the North Wind – a food journey through the far northern corners of Russia featuring recipe photos, portraits and environment photos.